Yesterday I met an amazing young woman who is really trying very hard to change the world or at least a part of it. 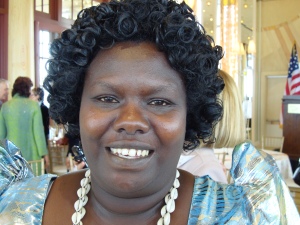 Beatrice Chalangat is Director of the REACH programme in Uganda, where she works tirelessly to stop female genital cutting (FGC). This practice is something more than just the physical act, it is a way of trying to subordinate women in Ugandan society, where those who manage somehow to avoid FGC are ostracised. They are not allowed to collect water from the local spring for example, or carry out menial but important tasks such as going to the market for food.

The Americans for United Nations Population Fund (UNFPA) has supported Beatrice in her quest to improve the lives of many Ugandan women, by encouraging them to stay in education for longer or by providing them with healthcare, and yesterday she was honoured at a lunch in a very plush room on the 32nd floor of the Westin St Francis Hotel in downtown San Francisco. Ms Chalangat held the attention of the entire audience in complete silence for 15 minutes, and only when she had ended her account of life in Uganda did they appear to breathe again. A standing ovation seemed only too appropriate at the end of her talk, and yet a little insufficient too.

Ms Chalangat lives in Uganda under the constant protection of bodyguards, as she herself has been threatened by her opponents. Her life is in danger yet she continues to speak openly and to fight for the human rights of Ugandan women.

It seems that American women have over recent years taken Hillary Clinton completely to their bosoms, as she was widely quoted in other speeches. By way of reminder here are her words from the famous speech she made in Beijing in 1995 :-

“The voices of this conference and of the women at Huairou must be heard loud and clear: It is a violation of human rights when babies are denied food, or drowned, or suffocated, or their spines broken, simply because they are born girls.

It is a violation of human rights when women and girls are sold into the slavery of prostitution.

It is a violation of human rights when women are doused with gasoline, set on fire and burned to death because their marriage dowries are deemed too small.

It is a violation of human rights when individual women are raped in their own communities and when thousands of women are subjected to rape as a tactic or prize of war.

It is a violation of human rights when a leading cause of death worldwide among women ages 14 to 44 is the violence they are subjected to in their own homes.

It is a violation of human rights when young girls are brutalized by the painful and degrading practice of genital mutilation.

It is a violation of human rights when women are denied the right to plan their own families, and that includes being forced to have abortions or being sterilized against their will.

Women must enjoy the right to participate fully in the social and political lives of their countries if we want freedom and democracy to thrive and endure.”